On the first day of Preschool the teachers announced that we would be going to the Pumpkin Patch. Each and every day for a month and a half, upon waking my 4 year old has asked if it’s Pumpkin Patch day, and each day I said no. Until last Thursday when I could finally say yes.

The trip was rescheduled for today, thankfully. But to get him there on time I had to drop his brother with a friend so that he could get to school and we could get to the pumpkin patch on time. His brother was not so impressed that he had to go to school while we were going to have fun without him. He even tried the “I don’t feel well” trick, but I wasn’t falling for it.

While riding the train one of the other preschool moms was asking about the Carrot Soup recipe I posted yesterday. (Yes, someone other than my mom reads my blog!) It was then that I had an “oh crap” moment as I realized that I sent my son to school without his thermos. I had meant to warm up soup but in our rush to get to the pumpkin patch I forgot. Damn, that mom of the year award will pass me by once again.

We cut our Pumpkin Patch trip short so that I could rush home, warm soup and drop it off at the school so that my son who is sick but not really isn’t eating only bread and an orange (which I didn’t peel) for lunch. At least I remembered the spoon! Plus he got a store bought cookie in with the soup because I felt guilty.

The pictures don’t show the real story, but they rarely do. Except maybe the skeleton riding the hay bale, that one is on point. 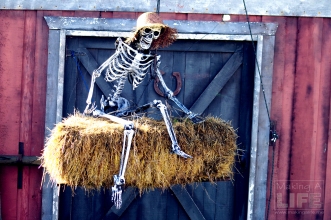 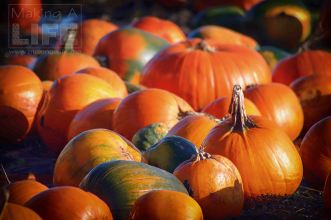