Two and a half months after brain surgery my husband and I went away over night to celebrate our anniversary without the kids! It was the same weekend as the Brain Cancer Got Me Thinking art show, in October 2015. I participated in the art show and was interested in seeing the show, but I also wanted to have a spa weekend with my husband.

We opted for the spa weekend, and I am glad that we did. We spent the better part of the day in a mineral pool and it was the first time in a long time that I felt relaxed. It also inspired the piece which I submitted this year for the Brain Cancer Got Me Thinking art show.

Ebb & Flow is a quilling (paper) piece inspired by our weekend away post surgery. Learning that you have a brain tumour is a dark experience. “Ebb & Flow” depicts my recovery from brain surgery. The large dark circles represent the hours spent in surgery and the balance of the circles depicts the good and bad days after surgery. I was in a state of constant fluctuation much like the ebb and flow of the tide. The colours used are intended to represent water.

This piece is part of the Brain Cancer Got Me Thinking show at the Visual Space Gallery in Vancouver. The show runs from May 3-9th. If you check it out let me know what you think.

The day before surgery I got a call to let me know that my craniotomy was scheduled for 8am the following day. I had never felt so nervous in my life as I did the night before and morning of surgery. I have never been hospitalized for an illness so this was new territory for me.

The night before surgery I went out for dinner with my husband even though I didn’t have much of an appetite. I knew that it might be days before I could eat solid foods again so we went to one of my favourite restaurants. After dinner I read the kids a couple of stories and tucked them into bed. It was a difficult thing to do knowing that I wouldn’t see them again before surgery. My husband and I went for a walk because I knew that I wasn’t going to be able to walk for days. I washed my hair (because I wouldn’t be able to wash it again for 10 days), cleaned my body with surgical soap and went to bed.

In the morning I showered again with surgical soap, got dressed and headed to the hospital. We arrived at 2 minutes to six and were greeted by an administrative clerk that didn’t like her job. She gave us a form and sent us to the next waiting area, where we handed in the form and waited in the next waiting area. I was called into an area with 6 beds, and told to get dressed into the hospital gown and hop into bed. The nurse asked me a pile of questions, checked my temperature, blood pressure and tried to start an IV. She promised that she would only try once to start an IV. She wasn’t able to find a vein, I am sure that my veins were scared and hiding. She called my husband in so that he could wait with me. About 7:15 a porter arrived to take me upstairs. My husband walked me to the elevator, gave me a high-five and the last thing I saw was this. 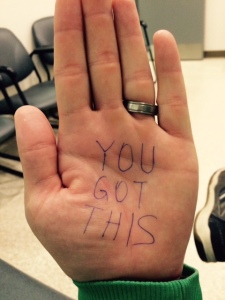 I was taken to operating room waiting area with the same patients I got ready with downstairs and we were lined up side by side. While I was lying there my first visitor was the anesthesiologist, next was a nurse, followed my neurosurgeon, and then my surgeon’s resident. The first patient was wheeled away. The woman beside me was picked up by a porter and we wished each other well. Then it was my turn. My porter’s name was Pat and she had a similar surgery to mine 15 years prior. I can’t even tell you how important it was to hear her story as she wheeled my down the hall.

It was a couple of minutes after 8am when I arrived in the operating room and shifted from the gurney to the operating table. I heard someone mention something about my position and head clamping. I was introduced to four nurses, a second anesthesiologist, a second neurosurgeon (who I can only assume was the one cutting as she was wearing a full face shield). There were at least 9 people in the room but let me tell you it was like the set of Grey’s Anatomy in there. Everyone that I saw was attractive and the anesthesiologist’s were hot. I had an anesthesiologist on either side of me, one with oxygen the other putting the anesthetic into the IV and the view from where I was lying was good. Not a bad sight to drift off to at all.