Before I could be discharged from the hospital they needed to make sure that my pain was manageable without heavy narcotics. To be honest I was a little worried about where they would move me to because I had been out wandering the halls of the Neurosciences ward and it was pretty scary out there. The hallways were lined with wheelchairs that belonged to the residents of the floor. Everyday there was an elderly woman parked in the same location regardless of the time. One person had decorated their room with pictures, and another moaned all day. It was all a little depressing. I was also concerned that I would be in a room with elderly men cause that would make me uncomfortable. I had learned at my pre-admission appointment that the ward rooms were co-ed and had been worried about it ever since. 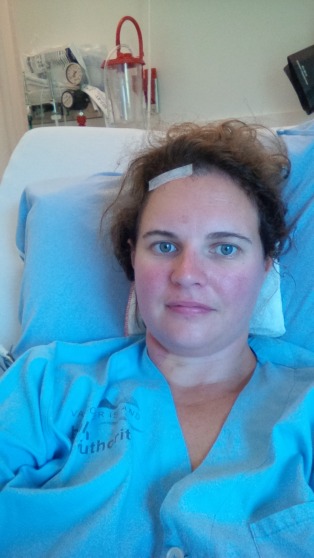 Last day in the hospital 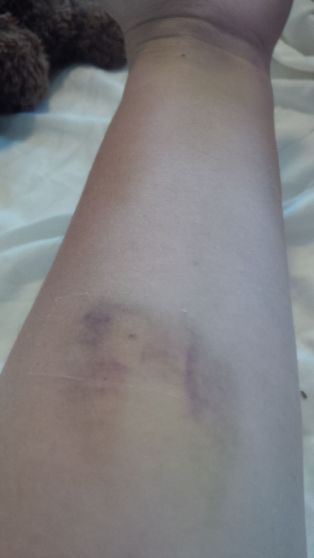 Fortunately for me I was given a semi-private room with one other woman. She was lovely and I will tell you more about her in another post. When I was moved I walked from one room to another while my husband, youngest and the nurse moved my furniture and belongings. I no longer had anything but band aids and staples attached to me and it was wonderful. I decided it was time to take a shower but I still wasn’t quite 100% sturdy on my feet so my husband was nice enough to help me. It’s pretty humbling as a grown woman to get someone else to help you put on your underwear. Thankfully it was just once but it made me think about how much of my health I take for granted.

My mom had come to visit and I decided that I was ready to go outside. Neuroscience was on the sixth floor so to get outside we needed to take the elevator. When we got off on the main floor there was a huge lineup for the elevator being that one was out of service and there were only two to begin with. At the end of the line I saw a woman that was about to give birth. Even in my semi-drugged state I realized that she should have been moved to the front of the line. I asked her if she was in labour even though it was clear from her sweaty red face. She said she was going to take the stairs and my mom pointed them out. I was making a small scene telling her and everyone that could hear how rude people could be. I suggested she flag down a porter pushing a patient in a wheelchair because he could probably get her into the service elevator, and about 10 minutes later my mom went up the stairs to make sure that she wasn’t having a baby in the stair well.

The following day I went for a longer walk and tried the stairs for the first time. I made it one flight when my husband looked at me and suggested the elevator. I was still experiencing quite a bit of dizziness because the tumour was removed from the part of the brain that controls balance. I needed a little lie down after our adventure outside, it was a little sad.

My doctor had been in the day before and said that I might be able to go home on August 12th. He also said that he was going to be going Salmon fishing for the day with friends from out of town but if I was ready to go home I should have the nursing staff call him. They did call him and at 8 pm I was released. I was so happy to get out of the hospital and it was time.

We had to stop at the drug store on the way to get my pain prescription. My hair was crusted to my head, it still had iodine and blood in it plus 6 days of dirt. But I couldn’t wash it until I got the staples out. I thought that I would have the worst hair in the store but no, there was a young guy there that had just dyed his hair blue, and his neck, shirt and belly. No one was staring at my dirty hair, band aid on my forehead or train track staples in the back of my head.

When we got home the kids were waiting for us in bed. I was still pretty sensitive to noise, and we talked about making sure not to yell in the same room as mommy. But then the kids asked things like, can we talk? can we play trucks? what if I have a nightmare can I call you? and the rules were tossed out.

After spending 5 night in the hospital I was so happy to sleep in my own bed I made myself right at home.

6 thoughts on “On the road to recovery”