My husband had a birthday last week which prompted me to ask, what kind of cake would you like?  His response…you know that one that your mom bought from the grocery store that one time when she was visiting, that was really good.  I respond with…the one that she got the day after I delivered Logan??  He’s like ya, it was good.  OK seriously I have no idea what the cake from the grocery store that my mom bought more than 2 years ago 24 hours after I gave birth to our second son tasted like, what it looked like or what it was called.  Neither could he, he just remembered that it tasted good.  I also have the feeling that if I could have found the right cake that it wasn’t going to taste the same as he remembered, so I opted for something different.  Frozen banana peanut butter chocolate pie

Did you know that fourth anniversary gifts are flowers, fruit and appliances?  I do because it was just our 4th anniversary and I bought my husband a Yonanas machine.  How romantic.  If you haven’t heard of it, it takes frozen bananas and turns them into the consistency of ice cream.  It might sound gross but it’s actually quite delicious, especially when you add chocolate, peanut butter, walnuts, whipped cream and coconut.  Apparently there are other ways to turn bananas into ice cream.  I saw some recipes that used a food processor, but we haven’t gotten to the food processor anniversary yet, so we don’t have one.  So if you have a Yonanas machine or a food processor and want to give this pie a whirl the instructions are below. 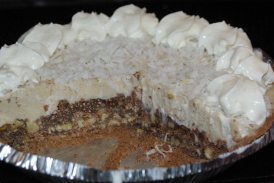 The kids were super excited for Daddy’s birthday.  Here are a couple of pics. 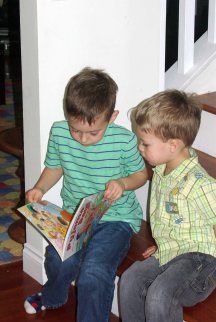 Patiently waiting for Daddy to get home