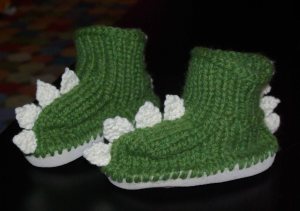 I was browsing the aisles at Michael’s for inspiration and I came across size 10 toddler suede soles perfect for my oldest son.  My creativity was sparked.  I left the store without the soles because I didn’t have a plan.  A couple of days later armed with a 40% off coupon (never go to Michael’s without one)  I bought the soles with the plan to make some slippers.  There was a pattern inside the slipper sole box so I thought I was set, except I wanted to knit with Super Bulky yarn and the pattern was written for sock yarn (for those non-knitters the pattern only works as written in the yarn specified).  So I searched Ravelry, and searched, and searched and I could not find a slipper pattern in Super Bulky with suede soles for a kids size.  So like any knitter I decide that I will do some math and make my own pattern.  Like I mentioned in a previous post, I rarely follow the pattern exactly anyway, so I might as well just make one up.  Using the pattern that came with the soles as a guide I started knitting, and I am happy to say that these little slippers were the result.

One of the greatest things about making things is sharing them with other people.  If I can inspire people to make things themselves I am happy.  Lots of crafters don’t want people to “copy” their ideas, and I say go for it.

If you aren’t familiar with Ravelry, it’s a knit and crochet online commuity, with tons of free patterns and inspiration.  It’s a fantastic resource for anyone with an interest in knitting/crochet.